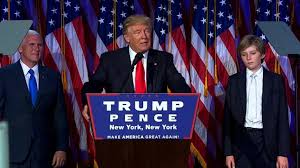 Half of America is elated! Half of America is in shock. Some celebs promised to leave if Trump won. There are riots, some non violent others not, breaking out across America. Others are crying and afraid of what the future holds. Republicans have a President, control of the House of Representatives, The Senate and control over the appointment of a Supreme Court Justice.

Well, minorities, slaves, gays, drug addicts, the poor who are harrassed and without justice existing under a dictatorship or the ruling class have felt anxiety and fear everyday of their lives. Some become mentally ill, abusive and even take their own lives or the lives of others. However, most still get up, work, and live their lives, even under oppression. Sometimes they even rise up and play their part in a movement.  Then a new President or Prime Minister owes their election to the votes of the forgotten, insulted and (in the case of the U.S.) deplorable.

It’s amazing to watch liberal & progressive democrats, regardless of ethnicity or orientation who chanted, “Love Trumps Hate” clearly prove by their actions that they don’t know the meaning of love. Hypocrites never know how to lose gracefully or practise what they preach.  Solutions bantering about include CA-EXIT/California succeeding from the Union and signatures collected calling for abolishing the Electorial College.

So, whatever the futute holds for America, I will still pray and sing,

“God shed his grace on thee and crown thy good with brotherhood, from sea to shining sea.”

Exerpt from song, “America the Beautiful”